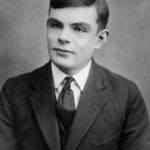 Put me on the note because I helped save the world from the Nazis with my codebreaking, and made modern computing possible!