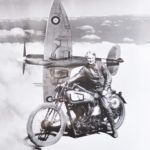 Put me on the note because I was one of the first female engineers in Britain and my invention for fighter planes made sure we won World War II.