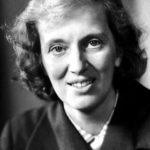 Put me on the note because I'm the only British woman to have won a Nobel Prize in the sciences!