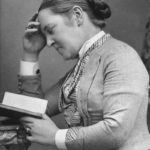 I led the way for women to enter medicine!

No questions to show