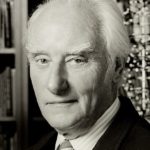 Put me on the 50 note as I Co-discovered the structure for DNA.