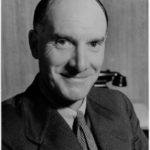 Put me on the note because I designed aircraft that pushed the boundaries of what was considered possible, including the forerunner to all modern jet airliners; The Comet!