Why should Alan Turing be on the new £50 Note? 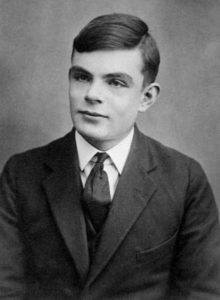 Championed by Giuseppe Cotugno, Pip Millington, and Sammie Buzzard; Alan Turing was first runner up in the £50 Note Zone poll.

The team discussed Turing’s lasting contributions to society and technology, including his WWII code breaking work, and his work on computing and artificial intelligence, and his work on the Turing Machine.

I played a major role in decoding the cryptographic cypher (code) used by the Nazi Luftwaffein WWII-Enigma. It is thought that the work of myself and my colleagues at Bletchley Park, the UK’s top secret decoding facility shortened the war by several years and saved millions of lives. Because this work was so secret I couldn’t publish or share any of my scientific achievements, some of my work was only released by GCHQ in 2012.

…I was one of the first to use a computer as a model to study how the human brain works and how a computer could emulate it, a practice which is increasingly popular today among researchers in robotics, neuroscience and psychology.

…I was the first to hypothesise that machines can think and learn and I correctly predicted that this might happen at the end of 20th century. I came up with the Turing Test which checks if a software is able to fool a human into thinking it is another human e.g. something like Alexa could try and pass the test (but should fail!).

…Despite all my amazing contributions I wasn’t treated well by my country as at the time I was alive homosexuality was illegal. I was given the option between prison and chemical castration, I chose the second but it had nasty side effects. Being incriminated as homosexual made me lose my security clearance and my job at Manchester University. The Queen granted me a posthumous pardon in 2013 and the 2017 law in the United Kingdom that retroactively pardoned men cautioned or convicted under historical legislation that outlawed homosexual acts is known as ‘The Alan Turing Law’.