Why should Rosalind Franklin be on the new £50 Note? 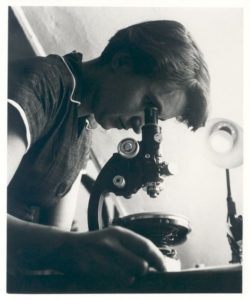 Championed by Sophie Louth, David Mills, and Nikolai Adamski; Rosalind Franklin was second runner up in the £50 Note Zone poll.

The team discussed Franklin’s work on the structure of DNA:

In the early 1950s, I was working on X-ray crystallography at King’s College London. With my PhD student, I took the image of DNA that led Francis Crick and James Watson to develop a successful model of the double helix structure of DNA. Without my image (which was shown to them without my knowledge), they almost certainly would not have achieved this, and the discovery of the structure of DNA might well have been made by an American team.

Crick and Watson, together with my former colleague Maurice Wilkins, won the Nobel Prize in Physiology or Medicine in 1962. I contend that I, rather than Maurice, would have been the third recipient (you can’t split the Nobel more than three ways) if I hadn’t died from cancer in 1958, aged only 37.

When asked the straightforward question, “How did you help people?”, the team discussed the lasting societal implications of Franklin’s work:

My work helped to establish the structure of DNA. This has led to revolutionary developments in genetics and biology. By establishing the genetic basis of some inherited diseases, we can try to fix them so that people will no longer have to live with conditions that will kill them at a young age. We already tailor treatments for some cancers based on whether or not they have a particular mutation in their DNA.

We can identify dangerous criminals by matching up their DNA with DNA they left at a crime scene, and conversely in situations like plane crashes and earthquakes DNA testing can help identify victims so that their loved ones can know what happened to them.

Looking at the DNA of animals helps us to target conservation efforts more effectively, e.g. by deciding whether two populations of closely related animals are one species or two. It’s all potentially valuable to many people, and it will only get more valuable in the future.