Why should Stephen Hawking be on the new £50 Note? 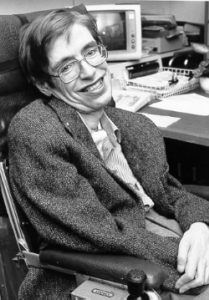 Championed by Lydia James and Ryan Cutter, Stephen Hawking won the most votes in the £50 Note Zone; students and members of the public believe he should be the scientist featured on the new £50 Note.

When asked why Hawking should be on the £50 note:

My work is far reaching, both literally and metaphorically!

I started my work on the theory of black holes in the universe. This work wasn’t only pioneering, it told us that if General Relativity is true, the universe has a beginning and an ending!

I spent a lot of my early career developing the mathematics of gravitational radiation from Black holes, this work is used in the foundations when discovering colliding Black holes and neutron stars that are detected in LIGO and VIRGO today.

Later I discovered what would be considered my most important discovery. I found out that black holes aren’t entirely black! Due to weird world of quantum mechanics, black holes radiate very slowly. This is called Hawking radiation (after myself)! Not only was this discovery important for cosmology and astrophysics, it also made a pivotal step in getting general relativity and quantum physics to work together. It also gave a massive surge for research into quantum gravity!

One of my biggest contributions was to help people understand this complex science without much maths at all! My book, a brief history in time, being my most popular and well known piece of work. It has sold over 10 million copies and has been translated to over 35 languages. I have helped people around the world learn about science and many of them have been inspired to become scientists themselves!

With my impact to science still resonating in the ears of young scientists around the world, my contribution to science is ongoing.

Being on the £50 note will honour my impact to the scientific community and be an homage to the inspiration I gave to people all around the world.

When asked about the impact Hawkings’ work has had on people’s lives:

I can’t speak on behalf of Stephen Hawking in this, but I believe he would have thought his work was important. The direct impact of his work has little benefit to the daily lives of people. However, his work has expanded our understanding of fundamental physics and of our Universe.

It might be too early to see the impact of his scientific work, as unlike many of the other scientists, his work is very recent.

However, there is also the impact he had by telling people about science. So many people know about black holes, space time, and care about physics because of his books. A whole generation of scientists were created because of him. What’s more, Stephen is one of the few candidates who was alive to see the impact he had on the world!

Additionally, outside of the topic of deciding who should be on the new note, students were inspired to ask more general physics questions, such as the possibilities of time travel, and on the nature of black holes.

Read the £50 Note Zone report here; or read what was said about the two runners up in the I’m a Scientist poll: Alan Turing, and Rosalind Franklin.